Retail will not disappear, but it needs to evolve. NOW!

These days there’s a lot of research flying around about where retail is heading – the thing is there’s no definitive answer. One report says that bricks and mortar is here to stay, the next report says that retail is history and half of it will be gone by 2020. Even though there’s no consensus we only have to look at GAME, HMV and Blockbuster to agree with Bob Dylan that ‘the times they are a changing’.

While the overall health of global retail is slowly recovering from the “Great Recession” the same can’t be said for physical retail stores – think Best Buy. Think Blockbuster. Think GAME, think Free Record Shop… How much do you spend on iTunes, Google Play, Xbox Live, PlayStation Store, Amazon, Bol.com, Netflix, Hulu, Deezer and Spotify? That’s money that by and large used to be spent on the high street. And the outlook seems to be more of the same. You’ve only got to look at the fact that the new PlayStation (source) doesn’t even play discs to realise that bricks and mortar retail that specialises in entertainment needs to evolve. And it needs to evolve fast.

People around the world have never spent more time or money on entertainment. But while the online use and consumption of digital entertainment is growing rapidly, the gap with offline retail is widening. So it’s no surprise that the likes of GAME and HMV are the ones that get hit. Or is it? If you look at the most successful retailer in the US, it’s a company that sells music, films, games and ebooks: Apple! Apple Stores have seventeen times better performance than the average retailer. Research data shows that Apple is leading by a significant margin. It’s more than twice as efficient as Tiffany and Co in second place. It’s also more than seven times the median of the top 20 and seventeen times better than the average mall retail space. Apple not only leads in absolute performance but also in growth. Note also the performance of electronics retailers that might be comparable to Apple. Only Best Buy and GameStop are on the list, but their growth is among the poorest, with Best Buy going in the wrong direction.

The apparel industry, however, is apparently much more resilient to this trend. According to Retail sales and research in terms of sales per square foot, nine of the top 20 physical retail stores in the nation are apparel companies. Two more (Sam’s Club and Costco) also sell significant amounts of apparel.

This outlier of physical retail’s decline makes sense: People “try on” electronics or books or movies (or the majority of anything else bought on the wild world of the web) by reading product reviews and user ratings or they play a lite version of a game, stream 60 seconds of a song or watch a movie trailer. More often than not, clothes shoppers still prefer to “try on” new outfits in front of a dressing room mirror. Thus, apparel will do better in physical retail stores than other products.

E-commerce will keep on growing

Still, apparel e-commerce is big, big business. And it’s growing and will keep on growing. This highlights the importance of two retail logistics factors – supply chain flexibility and retail IT capabilities. 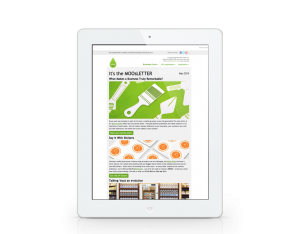 Like a big marketing idol of mine, Seth Godin, said “If you wait until there’s another case study in your industry you will be too late”. So retailers, act now and start connecting clicks and bricks. The future starts now!